Mass Hysteria Le Trianon is the sixth album and the third live that I do for MASS HYSTERIA, always with the same pleasure, the same desire. Photos and artwork for an album in CD / DVD and Vinyl version.

Six albums, eight years to follow the group, to see it become essential, to follow them on the dates, in the studio, in the galleys and the great moments. Eight years of not seeing them let go, of keeping a requirement intact, of not letting anything stop this 20-year adventure. Third LIVE, we have to find another angle, it was that of the intro of this concert, a concert which gave pride of place to Matière noire live…. 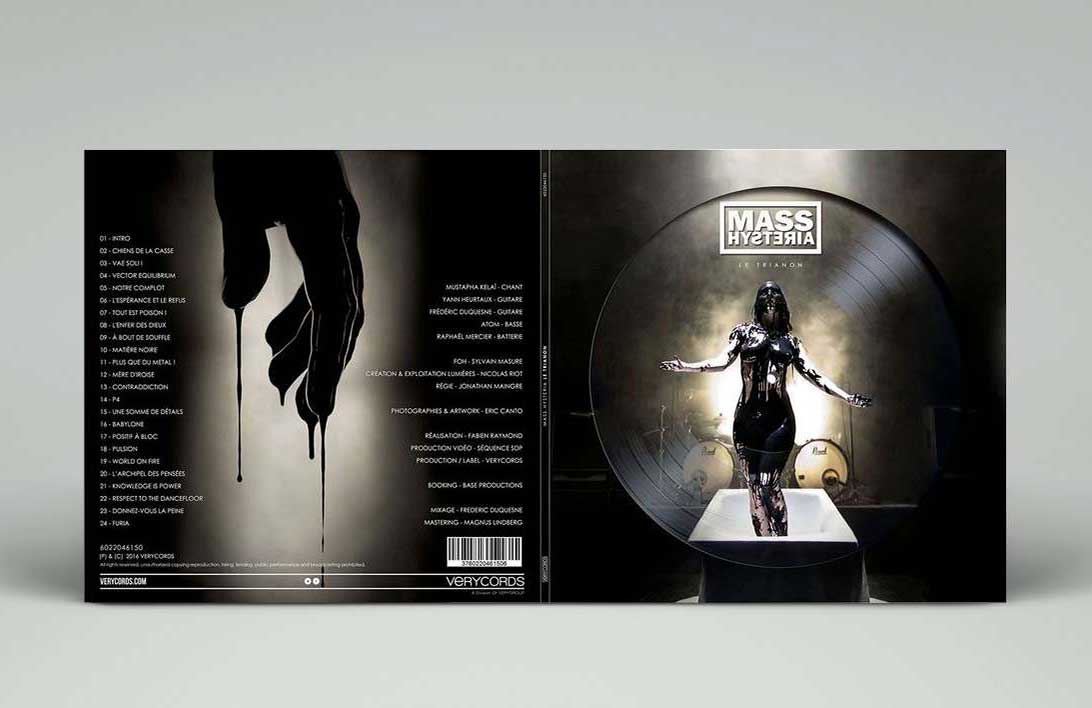 Back to the Metalobs.com review

In the live category Mass Hysteria, here is the fourth of the name: Mass Hysteria Le Trianon. Another live, what interest will you tell me? Yes, barely three after Mass Hysteria at the Olympia which then celebrated with great fanfare the twenty years of the French group with Bruno Coquatrix and five years after the energetic Live captured in the heat of Bikini in Toulouse, here is the last recorded in this superb Parisian venue after a first part of the tour which could not have seen the light of day ...

Indeed, since the live at the Olympia in 2013, two major events have taken place in our beautiful country of freedom of expression: a tragedy first of all in early 2015 with the Charlie Hebdo terrorist attacks followed in November by the murders of the Bataclan as you all know despite which Mass Hysteria Rightly wanted to ensure his tour debut at this same time by communicating clearly on this subject.

This is where the main interest of Mass Hysteria The Trianon this new live recording limited to 5000 copies. At the playlist level, we are entitled to the flawless interpretation of Mass Hysteria's latest album: Dark Matter. And unfortunately, the new compositions of this album have never found such an echo and have come to life in these dark times ("L'Enfer Des Dieux" dedicated to the missing victims on November 13, 2015).

In a serious and more and more serious tone, the musicians chain the fire (“Chiens De La Casse”, “Vae Soli!”, “More than Metal”…) interspersed from time to time with little jokes or spicy political dedications. ("Thank you Macron") of the charismatic singer Mouss who, if he recognizes during the concert not to be very noisy tonight, does the job as usual at two hundred percent in front of an audience of faithful to the cleat. “Mère d'Iroise”, dedicated to all “mothers” including the singer's disappeared one, melancholy ends this first set which is only the audio part of the live CD.

Then our guys come back with the classic “Contraddiction” followed by the essential and very punk “P4” where the two guitarists Yann and Fred invest as usual in the pit surrounding Mouss, thus defying the safety instructions of the Trianon for this evening.
Many other hits are raining down ("A sum of details," Babylon "," Knowledge is power "," give yourself pain "and" Furia ") a set where the good spirit reigns, proving once moreover, Mass Hysteria is at the same time an essential French group on stage and on album for nearly twenty-five years now!

Finally, let's add the presence of some renowned guests here and there (Stéphane Buriez, Reuno (Lofofora), the former guitarist Nicolas recovered and who is happy to see, the former bassist Vincent Mercier ...) and as a bonus the clip of "Hell of the Gods" as well as the preparations for this concert.

Dog of the breakage
Vae soli!
Vector equilibrium
Our plot
Hope and Refusal
Everything is poison
Hell of the gods
Breathless
Black matter
More than metal
Mother of Iroise
Contradiction
P4
A sum of details
Babylon
Positive
Drive
World on Fire
The Archipelago of Thoughts
Knowledge is Power
Respect to the Dancefloor
Give yourself the trouble
Furia