A very small audience of 120 fans saw the band perform a six-song set, a very small gauge in the middle of a slipknot tour 2020 which squats the stadiums. Six tracks including the titles Unsainted, Psychosocial, The Devil In I, Duality, Disasterpiece and Wait And Bleed.

The show was professionally filmed and will air on BBC Four as Slipknot Unmasked: All Out Life, Friday March 13, 2020 at midnight. FYI, BBC Four is the British BBC television channel available via digital terrestrial television, IPTV, satellite and cable.

Setlist of Slipknot Unmasked All Out Life (slipknot tour 2020)

Slipknot announced the 2020 Knotfest Roadshow, produced by Live Nation for its Slipknot tour 2020. Special guests such as A Day To Remember, Underoath and Code Orange will join the group. Last year at the Knotfest Roadshow, Slipknot performed in front of the biggest American crowds in its history.

This year, the 2020 slipknot tour kicks off on May 30 in Syracuse, New York, and ends on June 25 in The Woodlands, Texas, previously passing through 15 other cities. In addition, the Slipknot tour 2020 visited 30 cities in North America this summer. Slipknot continue on Slipknot tour 2020, a promotional concert suite from his latest album We Are Not Your Kind, which was released in August 2019 by Roadrunner Records.

Discover the documentary Slipknot Unmasked: All Out Life (Documentary)

Slipknot "We Are Not Your Kind": the new album

Slipknot released "We Are Not Your Kind", one of the most anticipated albums of 2019. This sixth album is the continuation of a very good .5: The Gray Chapter, an album dedicated to the late bassist of the band, was released five years earlier. The Iowa band formalized their All Out Life comeback last year before announcing the release of their long-awaited album. To this end, Slipknot unveiled the first single "Unsainted", which has already announced an album that combines both heaviness and strong melodies.

This is what we observe when listening to We Are Not Your Kind: we agree with its predecessor, with a very conceptual tendency, in particular thanks to the many interludes between each song constituting the album. You cannot escape the very psychedelic "Death from Death" with its Indian drums, and even "What's Next", with this music box in the company of a guitar, giving the effect of an amazing limit and annoying, but successful. 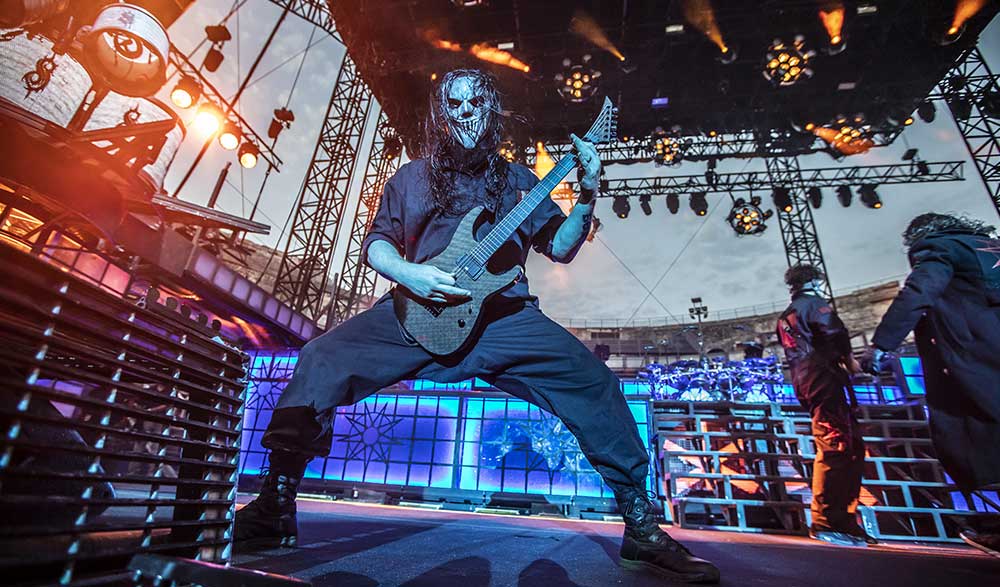 Slipknot released "We Are Not Your Kind", one of the most anticipated albums of 2019. This sixth album is the continuation of a very good .5: The Gray Chapter, an album dedicated to the late bassist of the band, was released five years earlier. Slipknot's recipe is very present, combining strong riffs, groove choirs and stage, in the company of Corey Taylor, who sings alternately rock and clear voice, because he knows how to do it.

In the most effective songs we notice "Nero Forte", "Solway Firth" or even the last single "Birth of the Cruel" with very current and typical of the group. Some tracks on the album evoke the early days of Slipknot, such as the very successful "Red Flag" or "Critical Darling", with this bridge of total efficiency that connects early fans to the American combo.

Nevertheless, we will find more planning songs, like "A Liar's Funeral" at a medium tempo or even "Spiders" with this piano sounding very seedy, an exceptional guitar solo and a very dry bass. Likewise in the case of “My Pain”, which is also very psychedelic, with a very high intro, composed only of electronic sounds, making the song dark and mysterious.

We keep with We Are Not Your Kind that it is a very dark and experimental album, through various arrangements throughout the album, supported by a complete and exemplary production. Indeed, Slipknot worked a lot to make this album as successful as possible and the result doesn't deserve a bit.

However, this sixth album requires a few listening sessions to appreciate all of its efforts. There are real nuggets there, the group did not content itself with reproducing what it knows how to do from the first attempt, which celebrated its 20th anniversary this year. You have to be able to dig to realize that "We Are Not Your Kind" is a winning bet for Slipknot and the Americans are making a triumphant comeback.

Other articles that may interest you:
Concert arenas of Nîmes